Last year’s Brexit vote and presidential election results upset the stock market apple cart, giving hope to hedge fund managers and mutual fund stock pickers who claim that underperformance has been partly because “stocks have moved in lockstep.” However, according to an article in last week’s Wall Street Journal, the argument doesn’t really hold water.

The “frenetic trading” in the weeks following each of these momentous events has given way to “remarkably muted” swings in share prices, the article says, and adds up to “continued frustrations for traders who seek to exploit rising volatility.”

While stocks have risen to record highs, says WSJ, on January 13th the CBOE Volatility Index reached “its lowest level since 2014” and that the S&P 500 “hasn’t moved by more than 1% in a day since December 7th.”

The article says that while big moves still occur, they have been the “exception rather than the rule. They have tended to be driven by specific events such as earnings surprises or corporate shake-ups, which traders said was likely a sign of a market on solid footing.”

Michael Dowd, a researcher at AJO, is quoted as saying, “You’re always going to see blowups and it’s human nature to then overestimate the rate of their occurrence.” However, he argues, “If you actually stop and pause and look at the record, you’ll see how calm it’s been.” 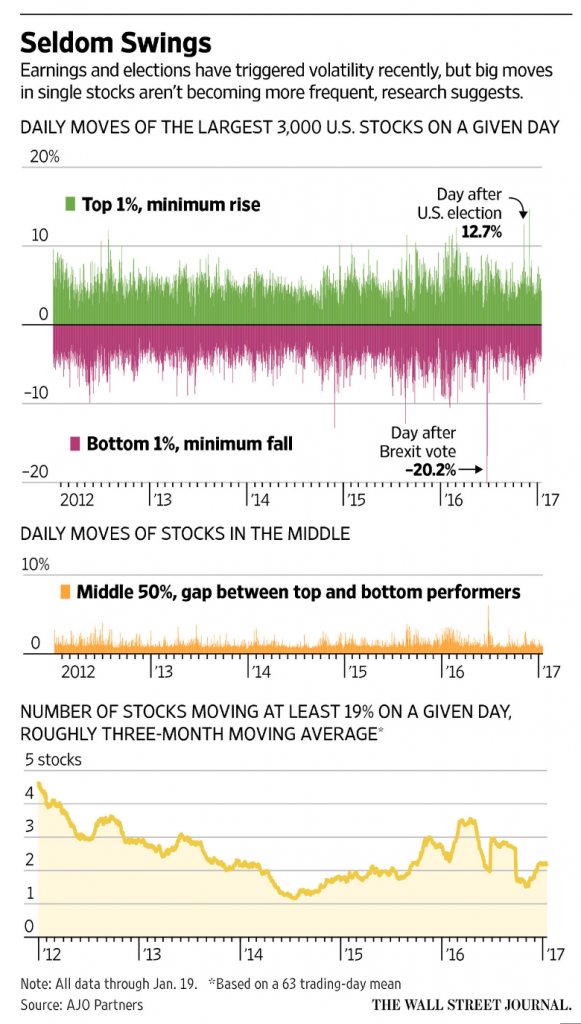