While, historically, an inverted yield curve (short-term rates above long-term rates) has preceded the end of a bull market and the beginning of a recessionary environment, a recent Barron’s article argues that the risk in the U.S. is relatively modest.

The article offers the example of how the U.S. stock market “peaked in 2000 and 2007 when the spread between three-month and 10-year U.S. Treasury yields inverted by about 50 basis points,” adding that while the yield curve is currently inverted to the tune of one percentage point, the spread has “narrowed in recent weeks.”

Challenges continue in the U.K., however, heightened by the upset in the recent election which, the article argues, “is unlikely to make Brexit negotiations any easier.” The U.K., it says, “faces the highest probability of a recession in the coming year of any major country based on the slope of its yield curve and the history of U.K. recessions since 1970.” 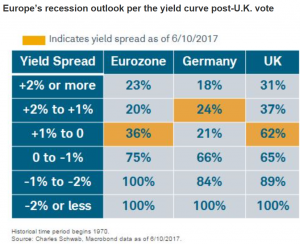 The article states, however, that bond yields and stock prices outside the U.K. generally indicate that the chances for a global recession are modest. “At first glance,” it explains, “a slumping yield curve paired with a rising stock market may seem at odds, but it’s clear to us that the message in the stock and bond market is the same: low risk of bear market and recession in the year ahead.” That said, the article argues that stock pullbacks can occur, and that investors “should maintain their long-term asset allocation to help insulate from short-term fluctuations.”